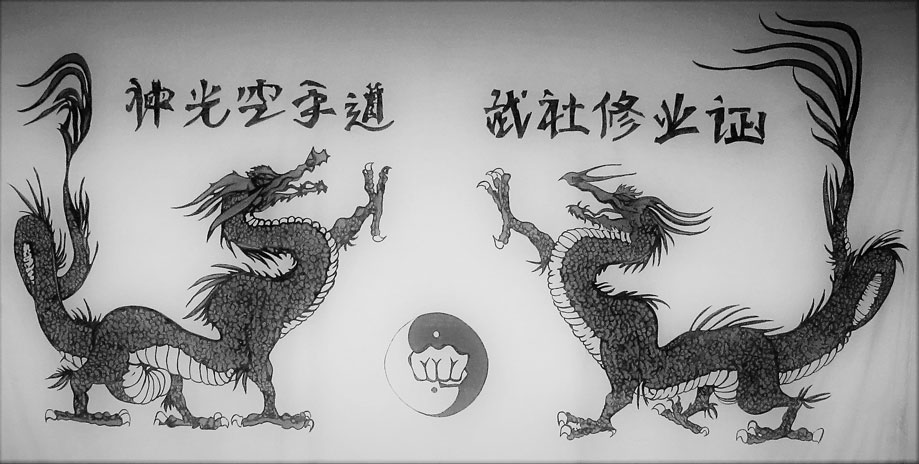 The Shaolin schools can trace their lineage back to the Fukien Temple, through a succession of remarkable Shaolin Grandmasters. The first of the Grandmasters was born in Fukien in 1849.

Born with a rare disease, that we know today as Hypertrichosis Languinosa; this condition covers the entire body with hair. The Chinese, back then, were very superstitious, so when they saw his affliction, they considered it demonic and they abandon the child. A passing monk rescued the newborn and presented him to the Shao-Lin Masters. They realized that it would be nearly impossible to find a family willing to adopt such a child, and decided to raise him without a traditional family. They named him Su Kong T’ai Djin.

He later became the first Grandmaster of Shaolin and the first to master all known skills of the Shao-Lin Temples. Over the years, each Master of the temple, passed their knowledge to him; he learned and mastered over 200 different empty hand systems, over 140 weapons systems, sixth sense training and chi Ma (Death Touch).

Ie Chang Ming received his training in the Fukien Temple under Su Kong Tai Djin and received his title of Grand Master only after the burning of the last temple.

One known story of Ie Chang Ming, he is said to have taken a shortcut back to the temple, when he accidentally walked up on a camp of soldiers. The soldiers quickly surrounded and began to attack him. Even with the use of their weapons, Ie Chang, quickly defeated and killed them. Once, the Military, learned of what happened, they offered money to anyone that would kill him. Ie Chang, quickly left China and eventually settled in Indonesia and began to teach the Shao-Lin ways. He used Japanese uniforms in hopes of fooling anyone looking for him.

History tells us that many of the monks in the Shaolin temple were retired soldiers or generals. Under the pressure of frequent attacks by bandits, the Shaolin Monks, combined Bodhidharma’s teachings with the martial arts techniques, of the Chinese Warrior’s and created a unique and highly effective method of combat; These combined techniques gave the Shaolin Warrior a far-flung reputation for deadly martial arts and fighting abilities.

The Fukien temple was known to be the second temple of Shaolin around 650 A.D.; throughout the centuries, the fortunes, of the Shaolin Monks were the results of political and dynastic changes in Chinese history. Many and other temples became part of the Shaolin system. Shaolin Monks, were alternately courted and renowned by those in power, who wished to have the monks on their side. The temples were burned and rebuilt, many times, but the knowledge of the art survived while the monks continually added to their knowledge and improved upon it.

Throughout history, the temples prospered and became widely known as centers of learning of philosophy as well as martial arts. Becoming a student of the temple was difficult; potential students were expected to wait outside the temple gates, for long periods of time, while their temperaments and attitudes were closely observed by the monks. Once admitted, students, endured years of service and countless chores before being accepted as disciples. Once accepted, students, would receive an unparalleled education in philosophy, fine arts, and the martial arts. When a student graduated from the school, they had to exhibit phenomenal skills, and pass through 18 testing chambers. The last and final chamber, was not for the faint at heart; the student, would have to grip a burning-hot iron cauldron with their bare forearms, branding them with the raised iron impression of a tiger and a dragon.

Throughout the ages, Shaolin Masters, developed new styles and forms of combat and brought them back to their temples. Many variations of Martial Arts styles, were incorporated into their teachings, that they had learned from their various travels and thus, their arts flourished in the temples, during the Ming Dynasty.

In the mid-17th century, Manchurian invaders, began to systematically and brutally take control of China. An internal rebellion, contributed significantly to the fall of the Ming Dynasty. It is said that the betrayal of an insider, was the cause of the destruction of the Honan temple in 1647 A.D. During this time, many monks fled to the Fukien Temple, where they continued to support the resistance fighters. This led to the destruction of the Fukien and other temples that practiced Shaolin Kung Fu. With the practice of Shaolin Kung Fu outlawed, the Masters continued to teach in hiding while in exile; taking many years before the temples were reopened in the early 1800’s and only being allowed for use of religious practices. The next rebellion was known as the Boxer Rebellion, of 1900, and caused another wave of escaped resistance fighters, many of whom were Shaolin Monks; they scattered to the United States, Australia, Korea, Indonesia, and other countries and the third burning of the Shaolin Temple happened in 1927. In recent years, the government of China has come to realize the importance of the cultural heritage of Shaolin, and reopened the temples.